To say that the EVE MK II by Bandit9 is unconventional would be to understate its stunningly revolutionary design. Created exclusively for M.A.D. Gallery it is – with almost justifiable hyperbole – described as “taking the joy of riding a motorcycle to a level beyond imagination”.

This custom creation is an evolution of the limited edition EVE and was designed and handcrafted by Bandit9, a Saigon-based workshop known for breaking the mould and building bespoke bikes with a futuristic design. As the company’s “Bandit Chief”, Daryl Villanueva, says, “Riding is a form of meditation for me. I’m at peace when I’m on a motorcycle. My focus is directed toward the road and nothing else. I can’t think of anything else I do that requires my complete attention on the present.” 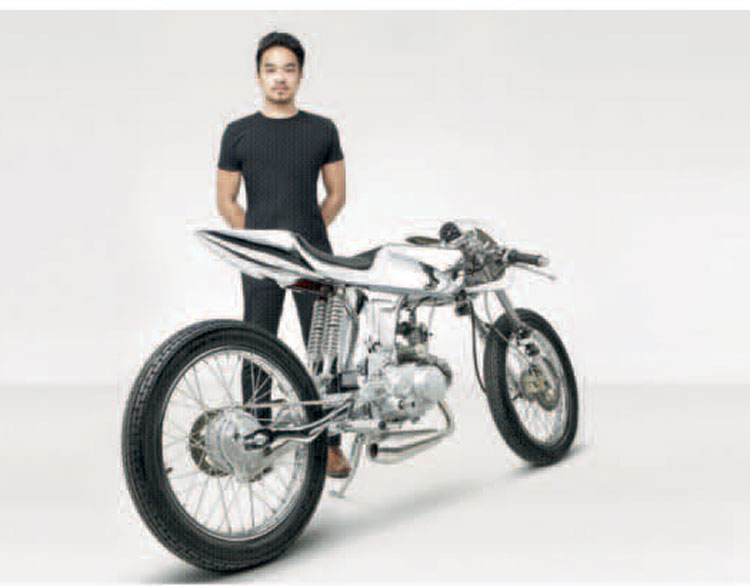 The process starts with the stripping of a 1967 Honda Supersport, followed by a complete facelift. “While everyone tends to go old-school on their custom designs with a few tweaks to make it look current,” adds Villanueva, “we tend to ignore the past and just make leaps forward.”

A standout design feature of the EVE MK II (which will be limited to nine pieces) is its handcrafted unibody tank in a sleek bullet shape built from a single piece of hand-polished steel. “While visually appealing, the form also combines the tank, seat and rear cowl into one – not an easy feat. One wrong move and the metal must be scrapped and the process restarted from the beginning.”

Adding to the production level of difficulty is the fabrication of the X Cowl. It is a common shape in origami, but executing it in steel requires particularly skilled hands and great patience. Other handcrafted details include a cowhide leather seat worked into the elongated unibody tank, custom exhaust, exposed suspension and electric starter.

“We want our bikes to embody (an) optimistic future and to show others that we don’t have to live in this cookie-cutter world where cars all look the same,” says Villanueva. “I actually blame bureaucracy and stringent road rules for killing imagination and possibility. That is why I named the company after outlaws. Because we’re not playing by those rules.”

He says that being part of the MB&F M.A.D. Gallery was always the dream. “This isn’t an exaggeration. It actually was a goal that I had set myself when I started Bandit9. I wanted to create something that could stand next to the finest machines out there. And I always said that if the M.A.D. Gallery ever called me, I would know that I am onto something good.”

Next Post (n) Resin Flooring For A New Contemporary Look

ACCEPT
We use cookies to ensure that we give you the best experience on our website. If you continue to use this site we will assume that you are happy with it.Ok
Thanks for subscribing! Please check your email for further instructions.